There is a lot to like about Munich. The Bavarians seem to have got things right. It helps that it is an affluent city seemingly at a pinnacle of social cohesion and organisation.

A sensible taxation regime enables excellent social services and education without people wasting loot on expensive and unnecessary private education and silly uniforms were dispensed with years ago..

Communal living creates enviable outdoor living where cyclists don’t exactly rule the road, after all there are multiple high range autos here and plenty of EVs, but there are thousands of bike riders heading to work or kindergarten-with children in their cabins. E scooters abound – a lot of fun.

Cafes, bars and biergartens thrive and we can buy booze at multiple outlets, take them to cool in the river, drop our trousers and sit peacefully naked swilling our grog along with the neighbours and no-one bats an eyelid. There's only really one rule in a biergarten ... after 4pm you cannot buy draft beer in anything smaller than a Stein.

But there has to be something wrong with Munich, surely?

We've only been here a few weeks so I'm going on limited experience ...

PT is easy to use and reasonably priced.

Health care including dental is cheap.

Family benefits are generous, as is annual leave. If Germany can run Europe's largest economy and grant 30 days annual leave, you'd think we could follow suit

Church bells ring frequently and, whether relevant to your faith or not, the sound is a reassuring accompaniment to wanderings.

Many locals are virtually bilingual; bus drivers and bar staff switch effortlessly to English on hearing our attempts to excuse our German.

Sorry Muncheners but the only beer I’ve enjoyed here was in Milan, oh and the one in Zurich and I found an IPA in Salzburg that was acceptable. But here? I’m still looking.

Did I say this town was at the centre of things?

A trip to the theatre turns into two. Our first visit to Maximilian Spielehaus to watch a play with English subtitles seemed doomed when we couldn’t see the subtitle screen from our cheap seats. We pointed this out to the FoH staff who moved us to a private box and later arranged cut price special tickets to a concert 2 nights later. That the concert was a showcase of Nick Cave's music was a bonus. Tremendous fun and even more so because we were in the best seats for the lowest price – a mere eight Euros.

It’s good to be travelling again and who knows ... if I find the right beer ...

Thinking of you all especially everyone involved in “Blackbird". There is a lot of singing around here, and I am continually reminded of all the hard work happening on the other side of this globe.

Adrian, as Chair, made his annual report and noted that in writing the report he was: “lifting the lid off the dustbin of pandemic memories and doing my best to try and forget the endless days of lockdown, cancellations, postponements and so on, there was some positive news flickering among the gloomy 270 days”.

In terms of WMIAA’s management and development of the association, Adrian noted that the burden falls to too few. He said that “the changes to structure considered in August 2020 that we felt would enable us to develop and progress is no longer possible, communication is less frequent than optimal and despite the hard work of those making decisions and keeping things ticking over, cracks are showing”. He suggested that there is much to be done and that he believed that continuing to interrogate our structure is necessary.

Simone presented the financial report which showed the association made a small loss in the year. This mainly seemed to be due to large declines in grants and donations. The income from the Pottery, Arts and Theatre groups was substantially more than in 2020, but some expenses were markedly higher.

All those nominated for officer and committee member roles were unanimously elected. However, Simone Kiefer only agreed to continue as Treasurer until a replacement could be found.

We are very fortunate that Andrea McMahon has now offered to act as Treasurer and the Committee has passed a resolution to bring her onto the Committee. All have expressed their admiration and thanks to Sim for the many years she held this role. Her hard work over so many years is very much appreciated.

WMIAA has just won a Manningham City Council grant to conduct essential training for Association Members and others from the community. This will be in First Aid, Fire Safety and extinguisher use and for the Responsible Service of Alcohol. We have the funds to train many people in each over the next few months and we will let members know shortly how they can apply.

The other major new item is that, after a long wait, WMIAA has now received Deductible Gift Recipient (DGR) status from the ATO. This is important as it allows us to attract a wider range of substantial donations and pursue more grant opportunities. Anyone donating more than $2 in future can obtain a receipt that will allow them to put their donation against tax.

Blackbird was written and first performed for the 2005 Edinburgh Festival, and has been performed worldwide ever since. WTC production has been passionately directed by Lisa MacGibbon, starring Erin Brass and Bruce Hardie and introducing Katie Barley.

This is a play that tackles a difficult topic but does so in a thought-provoking way, that makes us question our own biases about intentions, recovery and blame.

Because of the topic this is rated R16 - no children under 16 permitted.

There is no interval, and the bar will be open and tea and coffee available before and after each performance, and we encourage conversation.

Please join us for Blackbird, you wont regret it!

To book go to https://www.trybooking.com/events/879840/sessions 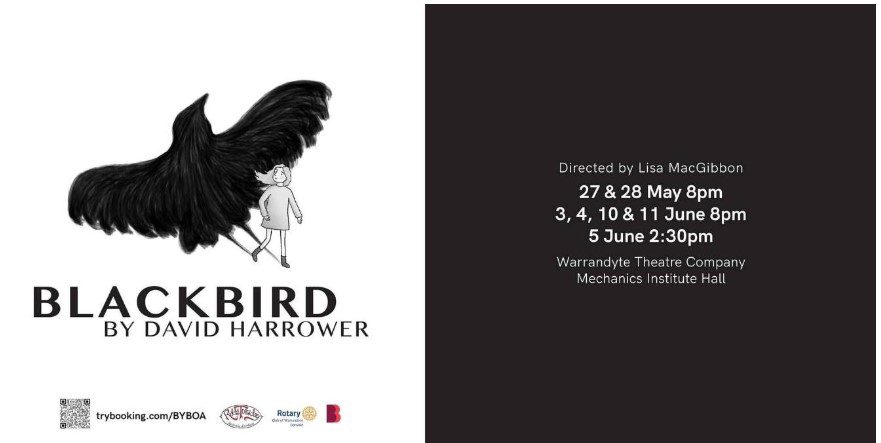 A View from the Bridge by Arthur Miller

A classic play about toxic masculinity. Set in New York (Brooklyn) circa 1950s. A traditional Italian migrant family is headed by Eddie who tries to protect his niece from the attention of a young immigrant dock worker.

Directed by Grant Purdy, the cast and crew are in rehearsal and this play brings back Tony Clayton, Simone Kiefer and Don Nicholson to the stage, and introduces audiences to Kiera Edelstein, James Banger and Paul Wanis.

If you haven’t heard, this play has been just about ready to open since March 2020! Directed by Susan Rundle, this play was quarantined of course and will be revealed (notice the pun there) from September 23.

The Follies Goes off the Rails - a variety show with sketches, dance and song

Our working title this year is The Follies Goes Off the Rails but, more accurately given all the postponements, would be a change of tense or maybe we should call it The Follies Gets Back on Track? Whichever way we spin things, it will be great to have the show back. Directed by Matt Wallace and Lawrence Phelan, zany songs and innovative sketches are guaranteed.

Do you want to perform or get involved with the theatre in some other way?

We are looking for several actors to play minor roles in “A View from the Bridge.” One female and three males – early to late middle age. Contact Grant - secretary@warrandytearts.org.au

We also welcome volunteers to get involved with backstage crew, stage managers, technical (lighting and sound), costumes, props, publicity, set building, etc, as well as actors and directors. If you are interested in being involved in your local theatre community we’d love to hear from you!

Many will remember Marion, mum to Adrian and Alastair, who managed ticket sales for the Warrandyte Theatre Company until the advent of Trybooking in 2012.

Marion died peacefully at home on May 2nd, at the ripe old age of 96 (and a half).

Thoughts to Adrian and Alastair, and families at this time.

Life Drawing has returned to regular sessions. Presently we have a new model booked for three weeks. Over the three sessions some members will tackle portraiture, while others pick different angles to develop an understanding of the pose.

We all seem content with the running and planning of sessions and so shall continue.

Annual membership fees for WMIAA are due!

The primary aim of membership is building and engaging an ongoing community of people interested in the arts and importantly it enables all those who enter the premises to be insured.

If you are an actor or director planning to be involved this year – at any time, we would like to encourage you to join up now. It helps us enormously to have funds in advance.

It has been challenging to maintain the hall during the past two years and we are aiming to raise funds this year to complete important renovation of the hall roof, the bio box and lighting rig. With funds in the bank early in the year we have greater chance of meeting our targets.

If anyone has queries or difficulty renewing their membership please don’t hesitate to contact Noelene on 0400 861 133 or email noelenecooper@bigpond.com