Described by some as an “unromantic comedy”, Love/Sick written by John Cariani is a very funny play comprised of nine 10-minute vignettes, each of which involves 2 actors.

We are seeking actors from 20 to 50 years of age that we hope will reflect the diversity in our community.

Auditions: (at The Mechanics’ Institute Hall in Warrandyte)

every Tuesday and Thursday from April 27th. Sundays, 4PM from May 2nd.

The play is set in America and if you can produce an American accent you should try to do so.

The composition of the play allows flexibility in casting and there will be multiple roles for each actor. It may also be possible to be cast in just one of the vignettes if you are “time-poor.”

Map of car parking near the Hall… 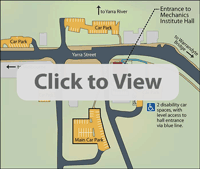