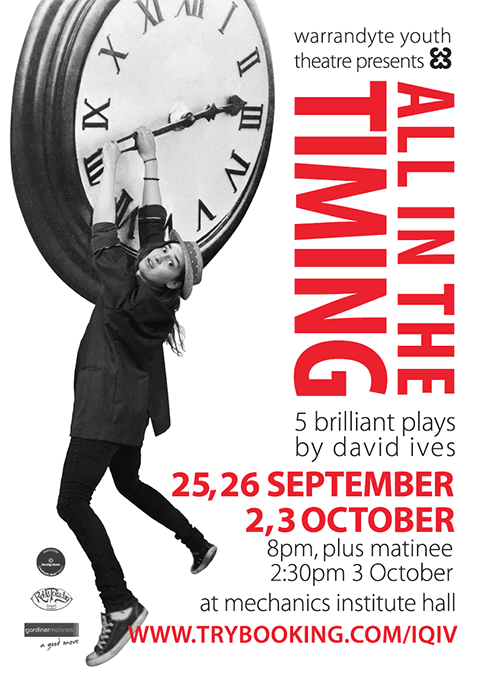 Directed by David Tynan, they showcase the comedic writing of David Ives and the sublime acting talents of our local youth!

The WTC has performed a number of David Ives plays over the last decade, and they have often won prizes at regional One Act Play festivals that we entered.

They are often quite short, snappy, and a real challenge for the actors to pull off the timing and characterisation required to bring out the comedy and surreal nature of the writing.

For our 2015 production, we have chosen 5 short plays to stage that showcase both David Ives' fine writing, and the skills of Warrandyte Youth Theatre (WYT).

A short synopsis of each of the five plays follows...

Zany hijinks as a a pair of lookalikes named Bebe W.W. Doppelgangler solve an identity crisis with the help of Dr William W. Williams and his nurse Fifi, who may or may not be Aphrodite the Goddess of Love. Or is she a male PE teacher in a dress?

Variations on the Death of Trotsky

This shows us the Russian revolutionary on the day of his demise, desperately trying to cope with the mountain-climbers axe he’s discovered in his head.

Two people meet in a café and find their way through a conversational minefield as an offstage bell interrupts their false starts, gaffes, and faux pas on the way to falling in love.

Utterly normal Norman walks into utterly ordinary Flora’s shop looking for a souvenir of his travels and together they find whirlwind romance, spurred on by a wacky translator.

The Mystery at Twicknam Vicarage

The plays to be performed are


Open map in its own window